Bridport, VT – January 6, 2012 – The Foundation for Alcoholism Research, Inc. (FAR) has awarded its second grant. In a letter dated December 20, 2011 to Charles P. O’Brien at the University of Pennsylvania Center for Studies of Addiction (CSA), FAR awarded $5,500 to supplement grants from the National Institutes of Health (NIH). 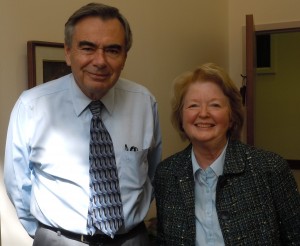 PHOTO: Dr. O’Brien and Peg Calder at the Center for Studies of Addiction at the University of Pennsylvania.

Charles O’Brien, M.D, Ph.D., Director of the CSA, and his research group have been responsible for numerous discoveries on the nature of addiction and improved treatments; many of these discoveries are now utilized in common practice throughout the world.

Two of the current studies involve the use of naltrexone, which greatly reduces craving in approximately 15% – 25% of those with alcohol dependence. The current studies are aimed at predicting, via DNA analysis, whether someone will benefit from naltrexone.

The FAR funds will be directed at assisting the CSA in recruiting subjects for the trials and for associated costs of interpreting the data derived from the studies. FAR is pleased to be a part of such important work and looks forward to continuing support in this area.

The amount of the award is significantly larger than FAR’s first award as this young organization (begun in 2008) continues to grow. The first award went to Prof. Kim Cronise, Neuroscientist at Middlebury College studying the tolerance aspects of alcoholism.

The work being done at CSA is much needed and long overdue. CSA and it directors are to be applauded for acknowledging the need and taking the necessary steps to implement the studies. In these terrible economic times, it is gratifying that we can make a difference in the understanding and treatment of alcoholism, which affects one in 12 Americans directly and untold numbers indirectly, says Peg Calder, President of FAR.

According to the NIH alcoholism afflicts 17.6 million people in the US, making it the third most prevalent disease, behind heart disease at 61 million, and diabetes at 23.6 million, with cancer fourth at 11 million.