This article was published in the Addison Independent on Sept. 24, 2009, with a photo by Trent Campbell.

By KATHRYN FLAGG
MIDDLEBURY — Ask any given college student about tolerance and alcoholism, and the question might well prompt a story about last weekend’s rager, keg parties and the heated debate about binge drinking on college campuses.

Ask Middlebury College Professor of Psychology Kim Cronise, or any of her student assistants, that same question, and the answer leaps out of the realm of campus confessions and into the world of scientific discovery. 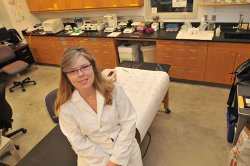 In Cronise’s lab in the psychology department at Middlebury College, the professor and her research assistants are investigating the role that physical tolerance to alcohol plays in the development of alcoholism. That work earned Cronise and her students the first ever research grant from the Foundation for Alcoholism Research (FAR), a Bridport-based organization devoted to promoting and funding scientific research into the causes, detection, prevention, treatment and cure of alcoholism.

The $2,000 grant, awarded this past summer, is part of a patchwork of funding — including support from the Vermont Genetics Network and the National Institute of Health — that Cronise and students are using to investigate tolerance.

“We are trying to discern if there is a cause and affect relationship between the rapid development of tolerance, alcohol preference and excessive (alcohol) consumption,” Cronise said. “In other words, do individuals who develop tolerance quickly also tend to prefer alcohol and drink too much of it? Is tolerance the leading culprit that causes and expedites the disorder?”

Current statistics from the National Institutes of Alcohol Abuse and Alcoholism estimate that one in 12 Americans, or 17.6 million people in this country, abuse alcohol or are alcohol dependent.

Cronise got her start in alcoholism research at the University of South Carolina, where she earned her undergraduate degree, master’s and PhD. At the time, she focused on fetal alcohol syndrome, or the problems that might occur in a baby after a mother drinks alcohol during her pregnancy.

“It’s the number-one leading cause of mental retardation in the United States,” said Cronise, “which is a crying shame, because it’s also 100 percent preventable.”

That sparked Cronise’s interest in the dynamics of neural development, and how drug use specifically alters the very structure of our brains. She went on to study the genetics of alcoholism in adults in Portland, Ore., before landing in Middlebury.

Now she’s shifted her focus to the question of tolerance, or a decreased response to the effects of alcohol.

To do that, Cronise and her team of students are using lab mice to study the relationship between tolerance and alcoholism. In this animal model, the scientists expose rodents to alcohol over a short sustained period — say, a week or 10 days.

Then, at the end of that period, the students feed the mice alcohol and place them on the equivalent of a rodent treadmill. Mice who stay on the treadmill longer demonstrate to the researchers that they have built up a tolerance to the effects of alcohol. Those who stumble or fall are more susceptible to alcohol’s effects.

At that point, the researchers divide the mice into two groups: the tolerant and the intolerant. In the second stage of the experiment, the mice are given free reign to drink as they will. Even with access to both water and alcohol, the mice almost always prefer to drink the sweetened alcohol mixture, Cronise said.

What she and her students are trying to determine is whether or not the mice who have demonstrated a built-up tolerance are more likely to drink larger amounts of alcohol when given free access to it. So far, that appears to be the case, Cronise said.

If the alcohol-preferring mice do in fact develop a robust tolerance for alcohol, the team is also trying to figure out if that tolerance can be manipulated.

Down the line, this work might be applied to alcoholism in humans. Drinkers, Cronise explained, become tolerant to alcohol at levels that is incredibly damaging to their bodies and brains. They manage to override the signals that one’s body sends telling one to stop drinking.

If researchers can identify tolerance as one of the factors that permits this type of drinking, Cronise and other alcoholism researchers hope they can stall the development of tolerance, or reverse tolerance, in order to stave off toxic levels of alcohol consumption.

FUNDING RESEARCH
Though Cronise warns that big picture cures for alcoholism are a long way off from the work she’s doing in Middlebury, her research is encouraging to those pushing for more scientific investigation into the causes of the disease.

One of those people is Bridport resident Peg Calder, who founded FAR. The organization was incorporated in Vermont in April 2008 and received IRS approval for its nonprofit status a few months later. Calder was motivated to start the group after working with a loosely organized team of people across six states helping a young woman who was an alcoholic.

“She was a young mother, and she lost some very good jobs, she lost her family, she lost her freedom,” Calder said. She and the network of advocates for this woman eventually found a way to get her out of jail and into a rehabilitation program, but Calder realized that the professionals working in these programs didn’t have the tools to provide effective help for alcoholics.

Calder compared FAR’s work to that of the American Cancer Society or American Heart Association, both of which she said have paved the way for advances in the treatment of cancer and heart disease by focusing on research.

But Calder worries that alcoholism still has something of a taboo attached to it. Unlike cancer or heart disease, she said, some people think of alcoholism as being a choice.

“No one chooses to be an alcoholic,” Calder said.

She hopes the organization’s next fund-raiser — a bike ride in Bridport on Oct. 3 — will be another way to drum up money for a cause she thinks is under-funded.

“There’s not a lot of emphasis on the detection and the causes of alcoholism,” Calder said. “We’d like to catch it earlier. (Alcoholics Anonymous) has a great track record, but people lose so much before they even get there.”

On that front, Cronise has some heartening opinions to offer. There’s still a lot of ground to cover, she said. Alcoholism affects a tremendous number of people, and remission rates for those who seek treatment are high. Research has shown that, by the second half of an alcoholic’s first year of abstinence, between 60 and 70 percent of alcoholics relapse.

“When you drink and drink and drink, you change your brain,” Cronise said. When it comes to treating alcoholism, doctors are charged with helping alcoholics not only fight cravings and urges, but also with deal with the emotional challenges of kicking the disease.

“I think we’re making a lot of progress,” she said. “If you look over the last 50 or 60 years, what we knew about alcoholism then compared to what we know about it today — my God. … We’re getting there.