WHY WOMEN DRINK-AND HOW THEY CAN REGAIN CONTROL 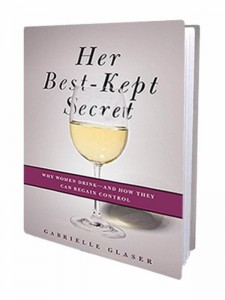 When I first heard of Ms. Glaser and this book – it was via phone call from a supporter to alert me that the author was being interviewed on the radio. I found it live-streaming on the computer and heard enough that it prompted me to send an email to her which started a dialog. My next step was to ask the opinion of another supporter who is up on literature to do with alcoholism. She didn’t think this book had much to add so I approached it with doubt (turns out after much time and information had passed that she was thinking of a different book). The author is not “in the field” but is a journalist. So I began reading the book with some skepticism but also with a bit of hope based on the part of the interview and the few emails that had transpired.

When I started reading – I couldn’t stop. It kept me going from two aspects – one was how well it was written, how easily it flowed and the other was the wealth of, IMHO, good information.

Before I go any further in this review, however, let me point out that the title does not do it justice in two opposing directions. On the one hand I feel that is delivers less than indicated, and on the other hand more.  I did not find this to be a “how-to” book with a recipe for a solution to over imbibing, as implied. On the other hand, this book is useful to men as well as women.

It does devote many pages to the history of women’s drinking habits and the cultural changes associated with that. It also devotes many pages to the role(s), some not-at-all in women’s best interests within Alcoholics Anonymous.

The best part of the book – hallelujah – is that it discusses many methods and treatments that help with sobriety. The 12-step programs are excellent but do not work for many people – regardless of gender, religion, or background. There are additional behavioral techniques – such as mindfulness training, and medications that help curb cravings. This book discusses some of these, but not as “silver bullets,” but aids to those afflicted– just like nicotine patches are aids for smokers.

Page 101 is illuminating when it sheds light on “The contrast between the research on alcohol and cancer launched by the federal government in the 1970’s. …hundreds of new cancer therapies…nearly 1,000 more …in development…. Yet … a mere six drugs to treat alcohol abuse.” (Reviewers note:  17.6 million people in the US suffer from alcohol dependence, 11.0 million from cancer).

Ms. Glaser does a great service to those addicted as well as advancing society in making public that alternatives exist and work. Not all methods work on all people – as with many diseases – and she reminds us that we should always keep our minds open to new methods.

Many rehab facilities and counseling centers have a policy against medical assisted recovery. This has got to change and Ms Glaser’s book is a step toward that. If you are addicted or have a close family member or friend who is addicted – this book is worth reading.

Mindfulness is gaining attention as a treatment for alcohol dependence. Putting it in the forefront may be due to a recently published book “the mindful path to Addiction Recovery A Practical Guide to Regaining Control over Your Life” by Lawrence Peltz, MD. Although the subject has seen numerous publications in the last 20 years and was first introduced by the Buddha, Dr. Peltz’s book is excellently written and is easy reading given the complexity of alcoholism treatment. The ease is due in large part to his use of examples in three categories. First, he tells us about people and their circumstances and carries them through the book. Secondly, he uses everyday tasks/events to explain concepts. For example: aversion to getting out of bed on a cold morning vs craving to stay in bed. Lastly are examples of exercises to practice learning mindfulness techniques.

The book serves many audiences, the professional and non-professional, the addict and the non-addict. I suppose, like many books, different people take away different concepts from it. What I got was a concrete method to slow down that racing mind and body that are attributes of many addicts, exhibited by darting eyes and twitching fingers or shifting feet and disjointed speech patterns. From body awareness the book progresses to awareness of decisions – ultimately arriving to awareness when confronted with the choice of whether to drink.

I think the book has merit for all people and can be helpful for addicts, but with severe limitations. As with many diseases, alcoholism is progressive. The Mindful approach, in my opinion, has much more merit in the early stages. In later stages, the brain has been so damaged that applying these techniques would be extremely difficult.

And from a societal point of view, mindfulness is one more example of the addict having to take on the burden themselves. Anti-craving medications for smokers are perfectly accepted. Why shouldn’t the same be accepted for drinking?

I feel that the Mindful approach is a Band-Aid until we can have medicinal help as well. And Band Aids are Good!